Late last year Space Studios Manchester hosted the filming of ITV’s Coronation Street in Space 01. The ITV production had stepped away from its base at MediaCityUK to film a special ‘mini bus crash’ storyline that is currently screening on the channel.

Currently playing host to all three of the major drama & comedy commissioning PSB, with work on productions including Boy Meets Girl (BBC 2), Safe House (ITV) and No Offence (Channel 4), to be able to welcome Coronation Street on board has been a privilege for everyone at Space Studios Manchester and a testament to the collaborative outlook of the TV industry in the North West.

Please see below for an overview of both the storyline and production process, from the ITV Press Office:

The crash was transmitted across three episodes which will air on January 19th and 21st – but the drama continues in the weeks to come as the residents come to terms with the consequences of the accident. Sinead Tinker is the most seriously injured and it will be touch and go as to whether she is going to recover from her injuries. 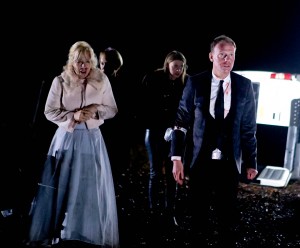 Meanwhile Steve McDonald is finally forced to face up to his depression as his actions on the night of the crash are called into question by his family and the other crash victims. Arch enemies Carla Connor and Tracy Barlow are also at the centre of the drama which will change their relationship forever. 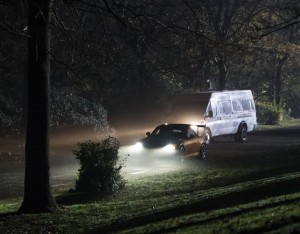 The mini bus crash was filmed over three weeks and the scenes include hundreds of special effects. Some of the filming even required the cast to be strapped upside down in the smashed up vehicle.

Coronation Street producer Stuart Blackburn said: ”Everyone involved in filming these dramatic episodes is very proud of the end results. The stunt is breathtaking and is real edge of the seat stuff.

“But, in the spirit of great storytelling, the crash itself is just the start of the drama and will have far reaching effects for all the people involved in the coming months.” 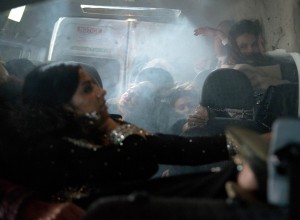 • The minibus accident is Coronation Street’s biggest stunt since the Tram Crash in 2010.

• A huge challenge for the art department was to make a studio; grassy fields and a quarry edge look the same. This meant lots of foraging for undergrowth and a vast amount of landscaping.

• Each detail in each area had to be precise including the angle of the ramp in studio that the minibus was to rest upon. In studio to give the impression of it moving the vehicle was placed on air bags and a wooden tray covered in undergrowth was used to simulate a sliding movement. On location weather conditions meant we had to replenish the vegetation each day ready for filming at night.

• It took 22 days to shoot the five episodes that transmit this week. It involved over 200 hours of filming, over 100 hours alone to complete the minibus sequence.

• The boy racer sequences were shot at Trafford Park close to the Coronation Street’s Studios and in Manchester’s Heaton Park.

• A low-loader & tracking vehicle provided by Bickers Action were used for the driving sequences with the cast onboard the minibus.

• The most challenging location was at a Quarry in Glossop, Derbyshire where we see the minibus go over the edge. When working on the quarry edge, special riggers were required and all crew were harnessed. A digger was used to push the minibus over the edge!

• There were three minibuses in total, one for the driving shots, one for the roll stunt, which was also dropped off the end of the Quarry and one for the scenes after the accident filmed at Heaton Park and Space Studios Manchester. 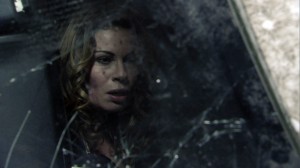 • The sequence was shot out of order and the design team had to match the three different minibuses keeping an eye on the continuity of damage. In studio, one of them had to be specially adapted and camera traps were cut into the roof panels. Windows were replaced with perspex and rubber glass was used to create the effect of shattered glass.

• The Costume department had to be careful not to dress anyone in blue or green due to the vast amount of Chroma Key work during the shoot.

• There are 202 visual effects shots throughout the stunt sequence.

• Double wigs were used for both Carla and Tracy. Approximately four large bottles of blood were used as well as additional SFX bought in for the injuries. Waterproof make up was used for the bruising due to the crew not being able to get in for checks once the artist were in the studio crash set up.