TV Skills workshops to be held at Space Studios Manchester

TV Skills workshops to be held at Space Studios Manchester 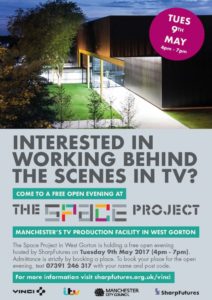 A series of skills workshops specifically for the TV and film sector will take place at Space Studios Manchester. Designed to help fill the skills gap in the industry’s supply chain, the free masterclasses are part funded by building contractor, Vinci Construction, and run by social enterprise, SharpFutures.

The tutorials will focus on trades related to the sector including construction, set building, joinery, lighting and rigging, painting and decorating, special effects make up and catering. Aimed at both those with no previous experience or qualified tradespeople who wish to re-train, workshop places will be available to over 18’s who live in Greater Manchester.

Anyone who wants to find out more about how to enter the industry can attend an evening day on 9 May at Space Studios Manchester aimed at inspiring local people to consider a career in this growing sector and showcasing the range of job opportunities available to them.

Susan Woodward, Founder of Space Studios Manchester said: “Our expansion plans are driven by the huge and growing demand for TV and film production in the north west. It’s vitally important we create new opportunities for local people who want to work ‘behind the scenes’ There are hundreds of people around the world working in TV and film who got their first break in television at Granada Television and we want to continue this legacy here at Manchester’s newest purpose built production complex.”

John Roberts, VINCI Construction UK said: “We are delighted to be behind the SharpFutures project encouraging young people into industry is a key goal of VINCI construction UK and when Sue asked us to help we were happy to support them in this venture, this compliments VINCI’s own objectives to train anyone including those out of work to become permanently employed tradespeople resulting from the delivery of the new phase of The Space Project.”

The £14m expansion of Space Studios Manchester will see the TV and film production hub double in size. Across the 6.8 hectare (17 acre) site, more than 90,000 sq ft of new buildings will be built for TV and film production and related support activities including a 30,000 sq ft stage. Also included on site will be additional 6,000 sq ft of offices and green rooms, 10,000 sq ft for set construction workshops – equipped with water and power and vehicle access via roller shutters – and a further 40,000 sq ft of business units to rent for companies who supply to the TV production industry. The new facility is due to be completed by the end of the year. 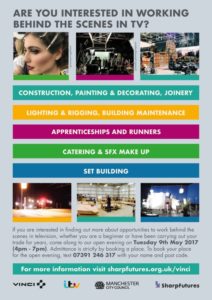 John Roberts, VINCI Construction UK said: “We are delighted to be behind the SharpFutures project encouraging young people into industry is a key goal of VINCI construction UK and when Sue asked us to help we were happy to support them in this venture, this compliments VINCI’s own objectives to train anyone including those out of work to become permanently employed tradespeople resulting from the delivery of the new phase of Space Studios Manchester.”

Sir Richard Leese, Leader of Manchester City Council said: “The City Council’s investment in Space Studios Manchester’s expansion will create a further 275 jobs and boost the local economy by nearly £10million a year. This is a fantastic opportunity for local people of all ages to learn very marketable, transferable skills. The TV and film production industry is a growing sector and Manchester has become a major player, with more and more world-class dramas and TV shows coming from studios in the city. To ensure the industry continues to flourish we need a home-grown talent pool. SharpFutures and Vinci Construction are playing a part in this and I would encourage others to follow.”

SharpFutures production manager, Elli Metcalfe, who previously was responsible for sourcing trades people for TV shows like 60 Minute Makeover said “Trades such as painters, joiners, plasterers and electricians are desperately needed in the TV and film industry. We need to create a community of craft skills and we’re looking to the local community to help us so we can bring more TV and film production to Manchester. We hope local people come along to our open day in May to find out more about the free workshops and the opportunities on offer.”

An open evening for up to 150 local people will take place on 9 May 2017 from 4pm – 7pm where anyone interested in attending a workshop can find out more. Places are limited so booking is essential.

For more information about this event, please visit the SharpFutures website: www.sharpfutures.org.uk/vinci. To book your place at the open evening, email [email protected] or text 079391 246317 with your name, postcode and what area you are interested in within the craft and technical sector.