Space Studios Manchester opens its doors to schools and careers 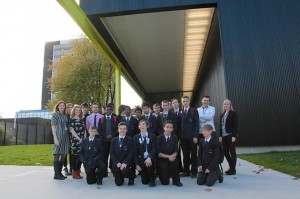 With the collaboration and support of the BBC, Space Studios Manchester, West Gorton’s new TV facility, recently invited 20 school children from The East Manchester Academy into the new 360,000 sq. ft. production facility, for an exclusive first look at the set of World’s End, a new drama currently in production for CBBC.

A vital component in the regeneration of West Gorton in Manchester, Space Studios Manchester is committed to creating and safeguarding jobs in the area as well as serving as a beacon for highlighting career opportunities in the fast-growing creative digital sector. Both the BBC and The Space Project have pledged their shared support to inspiring young talent to consider working in the creative industries.

World’s End is made by CBBC Productions, the in-house team based in Salford and the opportunity for The East Manchester Academy to visit the set was arranged by Dan Flint from BBC Children’s and delivered by SharpFutures.

SharpFutures, Manchester’s leading social enterprise set up to seed, nurture and grow talent and skills for the creative digital sector, works with Space Studios Manchesterto create opportunities for new entrants and in doing so was able to supply ‘runners’ to the World’s End team from the local area, as part of the BBC’s commitment to involving local young people in productions. SharpFutures’ commitment to engaging with local communities remains an important pillar of the social enterprise’s manifesto, nurturing talent into employment within the creative industries.

Accompanied by COO of Space Studios Manchester and Co-founder of SharpFutures, Rose Marley and Kelly Johns, a member of the World’s End team, the pupils became the first people outside the production to be given an exclusive first tour of the set, along with an explanation and overview of the huge demands inherent in a modern, mainstream TV production and the range of talent required to deliver against them. The first of many to come, SharpFutures will continue to utilise the opportunity provided by Space Studios Manchester to continue to inspire young people, with schools in and around Manchester encouraged to register their interest in being involved in future initiatives

Joe Brown, year 10, from East Manchester Academy, said of the tour: “I am so pleased to be part of the first school visit to Space Studios Manchester. I feel like I know about something really special. I’m not sure exactly what I want to do career wise yet but it’s great to know it’s really an option to work in Creative Digital when I leave school.”

Rose Marley, Director and co-Founder of SharpFutures, commented on the visit saying: “It’s important that we use every opportunity at our disposal to demonstrate to young people here in the City, the breadth of fascinating jobs that exist within creative digital that are firmly within their reach. We’d like to thank the BBC for working with us to open the doors to this special production and in doing help to inspire and inform a future generation about the relevant career outlets that exist to meet their ambition, talent and imagination.”