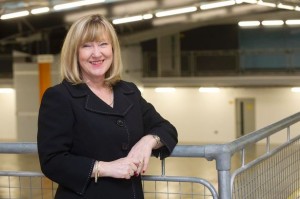 Sue Woodward, OBE, FRSA, the Founder of The Sharp Project and Space Studios Manchester, Manchester’s iconic and pioneering homes to digital entrepreneurs, creatives and production companies, is to be awarded the prestigious RSA Bicentenary Medal.

The RSA Bicentenary Medal was instituted in 1954 to commemorate the founding of the RSA over two hundred years earlier, and has been awarded annually to a variety of individuals for their outstanding contributions to the advancement of design in industry and society. Since 2009 it has been awarded to a person who has made an outstanding contribution through the use of design to increase the resourcefulness of people and communities. Only a handful of women have been awarded the medal.

As the intellectual driving force behind the creation of both The Sharp Project and Space Studios Manchester, as well as overseeing all aspects of design and construction, Woodward has irrevocably changed the face of East Manchester by developing an economically resurgent creative digital sector in an area of Greater Manchester that had been in urgent need of new industry. Sue Woodward is awarded the 2014 Bicentenary Medal in recognition of “her pioneering work in city regeneration, creating environments for professionals, start-ups, apprentices and children to engage and interact in the new media world, and thus supporting the new media economy in Manchester.”

Officially open since 2011, The Sharp Project has collected numerous awards for its pioneering approach to helping SMEs, start-ups and microbusinesses by creating a digitally orientated ecosystem for business. All occupants at The Sharp Project “make, manipulate or move around the world, digital content”, while it’s stages remain home to some of the UK’s most popular TV series, including Channel 4’s award winning, Fresh Meat.

Opened in 2014, Space Studios Manchester was conceived and built to attract valuable premium TV and film productions to the North West through the creation of a purpose-built complex. The first client, the BBC, began work on a 26 week drama before the complex was complete. As part of the regeneration of East Manchester, Space Studios Manchester will also serve to support the local community, with a commitment to creating and safeguarding jobs, as well as encouraging young people to explore career opportunities in the creative digital sector.

Clive Grinyer, Trustee of the RSA, commented on the decision to bestow the award upon Woodward, saying: “Sue is a shining example of the entrepreneurial heartbeat of the creative industries and her achievements showcase the power of creativity and digital in delivering benefits for businesses and society.”

Woodward added: “I’d like to express my sincerest thanks and appreciation to the RSA and its members for their decision to grant me the Bicentenary Medal. It is quite humbling to join a list of such prestigious previous recipients but a great opportunity to raise awareness of the important role that both The Sharp Project and Space Studios Manchester play in the creation of a new North of England offer. The Chancellor talks of a Northern Powerhouse, and as the Government look to more devolution to create a Super City of the North, we’re happy to say we are here to play our part.”