Space Studios Manchester can today announce a further phase in the completion of its comprehensive production proposition in the North, with four new support service providers taking up residency at the 360,000 sq. ft. site in Manchester. Silverback, Knight Rigging, design108 and Media Dog Hire join companies including Flix in taking space at the integrated office zones purpose built at Space Studios Manchester to attract companies able to provide independent support services for productions. 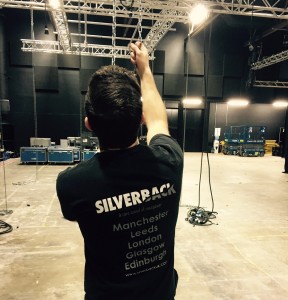 Silverback, a premier provider of general support crew through to technical assistance, is situated next door to Knight Rigging, specialist suppliers of rigging, stage design and general support services to the entertainment industry. Media Dog Hire, a supplier of camera and ancillary equipment to the film, television and corporate industries, have also taken space next to design108, a supplier of film and TV prop graphics to many of the UK’s leading production companies. Collectively this means productions choosing to base themselves at Space Studios Manchester have easy access to key ancillary service providers as and when the need arises.

While helping to create an ecosystem of support and collaboration under one roof, there is no obligation for production companies to use services supplied by businesses based at Space Studios Manchester, while mediadog, Knight Rigging, design108, Silverback and Flix are free to work with clients anywhere in the world. Combined with leading media services provider dock10’s recent move to invest in a new fibre optic connection to Space Studios Manchester from their base at MediaCity, the UK’s leading independent production facility is able to cater for any and all production requirements.

Carefully selected based on their ability to support Space Studios Manchester’s objective to help develop and grow the creative industries in the North, all prospective business residents are required to demonstrate the value their business is able to add, with each of the latest arrivals meeting specific qualifying requirements.

Sue Woodward, Founder of Space Studios Manchester, commented on the new additions by saying: “Over the past year, some of the UK’s leading production companies and broadcasters have chosen to make many of 2015’s most compelling drama and comedies with us at Space Studios Manchester, for the simple fact we do everything we can to help them make great TV; with our new tenants able to strengthen that proposition considerably. Knowing that they are only a flight of stairs away from a suite of service providers can provide huge peace of mind for time and budget stretched productions, while the businesses that choose to base themselves at Space Studios Manchester retain the freedom to work with whoever they want; delivering the best of both worlds for everyone involved.”

Christopher Walker, Production Designer at Tiger Aspect, commented on his experience of being based at Space Studios Manchester, saying: “You never quite know when you’re going to need to call on the support of someone able to provide a unique service tailored to the TV production sector; which makes it extremely helpful to be based at a facility with businesses on hand able to offer fast turn-around solutions to often short notice needs.”